Back to Italian Playwrights index 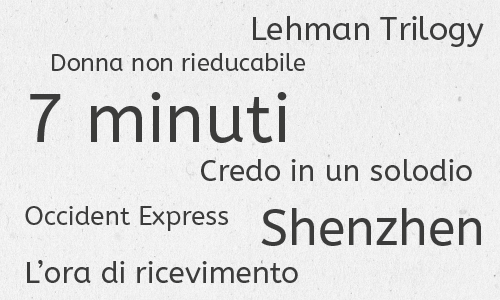 Stefano Massini was born in Florence in 1975. After the degree in Ancient Literature at the University of Florence, in 2000 he approaches theatre as assistant to international directors at the Maggio Musicale Fiorentino, and then as guest assistant to Luca Ronconi at the Piccolo Teatro di Milano.

In 2003 he begins dedicating himself to playwriting, and in 2005 he unanimously wins the Pier Vittorio Tondelli Price with L’odore assordante del bianco.

Donna non rieducabile. Memorandum teatrale su Anna Politkovskaia, written in 2008, is the work that opens for him the doors to European and Extraeuropean theatre: in 2009, thanks to Zachar International’s collaboration, Parisian editeur L’Arche Editeur starts translating and publishing his plays, that immediately obtain a great success in francophone countries, and then Spain, Czech Republic, Russia, Greece, up to the United States and South America.

In 2013 the Comédie de Saint-Étienne produces his play Lehman Trilogy,with the direction of Arnaud Meunier. Again, thanks to Zachar International, editor Per H. Lauke Verlag of Hamburg decides to translate the play into German and soon the main theatres in German speaking countries produce and have an ever increasing number of Massini’s works in their repertory: in the brief period between 2014 and 2017 Lehman Trilogy is staged in eight different versions produced in Germany, Austria and German speaking Switzerland.

2015 Lehman Trilogy has its premiere in Italy in the production of Piccolo Teatro di Milano and the direction of Luca Ronconi: the staging wins five Ubu Prices, amongst which the award for best Italian new play.

In 2016, in collaboration with Zachar International, Spain sees three productions of Massini’s plays: Lehman Trilogy, directed by Roberto Romei, that debuts at Grec Festival of Barcelona, and Donna non rieducabile and credo in un solo dio, directed by Lluis Pascal; in the same year credo in un solo dio reaches South America with two productions, one Argentinian and one Peruvian.

How does a great painter feel in a place where there isn’t any colour but white?
1889. White is the colour of St. Paul de Manson asylum’s walls. Van Gogh’s strongest wish is to escape from it, hoping his brother Theo will help him. The escape attempt dramatically fails and the painter udergoes brutal psychiatric treatments.
The sudden arrival of a brilliant psychiatric doctor that bases his new methods on hypnoses will change all perspectives.The pièce invites us to think about the subtle boundary between fiction and reality, health and disease, dream and waking life. It deals with the role of art in the contemporary world as well as the importance of individual freedom.
PLAY

There are wars that no one cares about. Anna Politkovskaia is one of the few Russian reporters in Chechnya. This not re-educable woman, as Russia calls her, is not there to judge: facts speak loud by themselves. She keeps going back to Chechnya despite threats, reporting testimonies from people who risk their lives by speaking to her.
In October 2006 Anna Politkovskaia is murdered in Moscow.
The author gathers six years of Anna Politkovkaia’s notes, articles, interviews in a detached and straightforward language.
PLAY

“I’ve always been attracted by those unsospected places that reveal themselves as authentical containers of words. Places that are shells for stories, unaware and permanent sceneries of human relationships. Amongst those places there’s the prison visiting room. A place only designated for dialogue. A place that is born with the specific vocation to house collisions, encounters, accounts, confrontations. And thanks to this vocasion it acquires a powerful theatrical identity. […] The bet of this triptyque consists in the attempt to portray small stories of single individuals as symbol/paradigm of more complex social phenomena, here dramatically framed in the building of reclusion and atonement. […]” Stefano Massini

La gabbia (figlia di notaio)
In a prison visiting room, an intense dialogue takes place between two women. A famous, wealthy writer from the upper-middle class is talking to her daughter, detained as extreme left terrorist. They meet for the first time in 11 years, and they seem to have nothing in common – except looking like two animals locked up in the same cage.
Zone d’ombra
A renowned geology professor is sent to prison with the accusation of having deliberately undersigned a false report about the soil conditions of an area, causing the collapse of a social housing building. His daughter, a violinist, rushes to prison deeply convinced of her father’s innocence.
However, during a feverish dialogue, her illusions vanish little by little, while her father has to deal with and take responability for his choices.
Versione dei fatti
A mother, accused of murder, speaks to her young lawyer. The old woman is judged for having pulled her son’s plug, after a 16-year-long vegetative state. While the lawyer is looking for a rational reason for this action, the accused indulges in a deep introspection, expressing an overwhelming pain no one seems to care about.
PLAY

“Nothing ever has only one meaning, ever.”
9 November 1989, the Berlin Wall falls. Twenty years later, a men and a woman meet. The misterious lives of these two people are strongly connected to Germany’s recent past.
Enigmas are this play’s file rouge. By trying to pierce the characters’ personal lives, we face the greatest of all enigmas: History.
PLAY

Eden Golan is a Jewish history professor, Mina Wilkinson fights in a foreign army, Shirin Akhras is a Palestinian student. The three characters’ points of view gather and move apart; suddenly, and very dangerously, these three opinions match one another, as an utopian dream of peace. Nevertheless, in a world built on contrasts, fighting on the same side is not permitted.
The three women never dialogue with each other; this creates a crescendo until the last sacrifice. A loneliness’ puzzle where nothing is more unsettling than the eternal confrontation with our own beliefs.
PLAY

Razna (Rose) is the only girl in a Jewish butchers family, crossing, with a fascinating naivity, the bloody horrors of the Balkan war. Her overwhelming simplicity allows her to support four different faiths. Her story is a surreal fairy tale where the most incredible things, like living more than one life, can happen. With an inexhaustible spirit, she turns her life upside down at the rhythm of a kletzmer song.
PLAY

15 September 2008 – Lehman Brothers investment bank collapses, dragging world stock exchanges down with it, and becoming the symbol of economic crisis.
Stefano Massini addresses this pressing issue retracing the history of Lehman brothers, from Henry Lehman’s arrival on American soil in 1844. From a little cotton shop to an investment bank, the playwright not only makes us discover how the capitalistic system works and evolves, but he also gives us the opportunity to observe this obscure and overwhelming event from a more human perspective.
PLAY

Eleven women meet for a works committee. The new management is willing to keep wages unchanged, but there’s one condition: the workers have to renounce seven minutes of their lunch break.
Only seven minutes.
At the beginning there’s no doubt about whether or not to accept the deal – it seems a pretty acceptable compromise compared to loosing the job.

However, soon a heated debate sparks between the women. What does this choice really mean? What do those 7 minutes truly represent?

“It’s very clever that Massini’s play mainly focuses on questions – also, because he asks the right questions. Together with the first class performance of the Mainzer women-ensamble.” (Frankfurter Allgemeine Zeitung)

“Modern powers don’t subjugate through prohibitions and censorship. Instead of exercising violence, they seduce. […] What this exactly means before the threatening scenary of a factory’s closure, is described in the impressive staging of the play “7 minutes. Works council” by Stefano Massini at the Mainzer Staatstheater, directed by Carole Lorang.” (Frankfurter Rundschau)
PLAY

Four workers, two men and two women, are closed in a room for a 60-minute test. Their abilities and latent fragilities are evaluated, in order to check if they are potentially suicidal.
This play is inspired by real events that have taken place in a Chinese factory, that got the world’s attention in 2010 after a series of suicides.
Massini’s play is much more than just a story. It tells us about four workers, each of them with its own personality, symbolizing thousands of workers in the whole world.
An intense enquiry that records every shade of the workers’ explotation system.
PLAY

Talented and experienced, yet cynical and disenchanted, Mr. Ardeche is a passionate professor, loving Rabelais and Voltaire’s Candide. Still, teaching can be a great challenge, especially if the class you teach to is in Les Izards, a Toulouse troubled suburban district, where police fights dayly against drug trafficking and organized crime.
Not only, Mr. Ardeche’s students also represent four different faiths. And on parent-teacher meetings, parents ask over and over again for their cultural and religious habits to be observed, howevere not showing the slightest interest in education.
The author sets up a grotesque and desperate tragicomedy addressing one of the greatest issues of our time: coexistence in a multi-cultural society.
PLAY

In 2015 Haifa, an old woman, flees Mosul with her 4-year old granddaughter Nassim. Their escape brings them on the “Balkan route”, a 5000-kilometer path across Turkey, Greece, Serbia, Hungary, to reach Europe.

A poetic portrait of a brave woman, whose strong will to live leads her to an almost hopeless journey. This is her incredible story.

“Breathless and with simple means a thrilling story is told. Haifa, an old woman, who has escaped Mossul’s massacre, becomes the symbol of hope. She’s the centre of gravity of seven refugees looking for protection in Europe. Nobody and nothing can stop her.” (Die Presse)

“Today’s victims have no name, no identities, are treated like animals. […] They are only worth the dollars they own. […] An exceptional, strongly celebrated start.” (Salzburger Nachrichten)

South-African Earth Corporation’s goal is to transform local farming in intensive farming. In order to do that, the corporation tries to expropriate small sugar cane farmers with a very simple strategy: they sign contracts to harvest farmer’s fields, forcing them to use the company’s pesticides. But the latter ruin the crops instead of boosting them, and farmers debts keep increasing. In a David versus Goliath fight, Hagos Nassor, a poor farmer, refuses to submit to the law of the jungle.

Dreams and theatre are deeply connected, for dreams show us reality in very misterious ways.
Stefano Massini picks passages from Freud’s The interpretation of dreams and guides us in an everlasting game that mixes reality dialogues and dream images using dreams’ narrative structure and surrealistic shades.
And aren’t these mechanisms the same used by theatre?